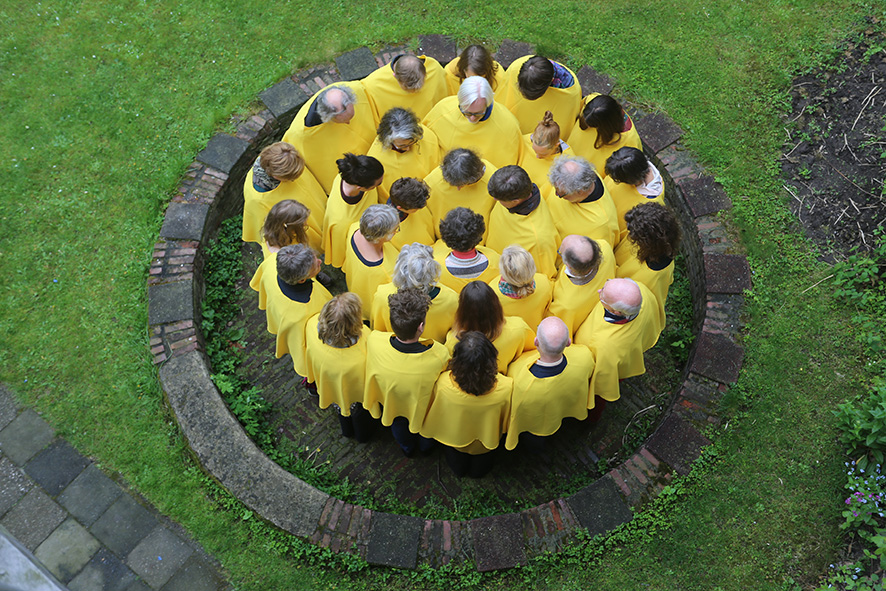 On Sunday 17 June it is the last day that the exhibition ‘The I and the Others’ will be on show at Kunstpodium T. We will festively close off the exhibition by doing the performance ‘Het Wij en de Objecten’, written by Cindy Moorman, twice with the audience this day. Cindy is master of the current exhibition.
The performance will be done at 14.00 and 16.00. The exhibition is open from 13.00 to 17.00. Take a look at  our Facebook group to see pictures of previous performances!

Cindy makes structures of people visible. She does this in several ways, like paintings and performances. In the exhibition ‘The I and the Others’ Cindy made a painting with the same title on the glass door of the exhibition space. The four blue dots signify the four participating artists, the red dots are the visitors. During the opening everybody received a red sticker, which they could stick on the glass after the exhibition.
Especially for our ten year anniversary, Cindy Moorman wrote a special performance for Kunstpodium T, titled ‘Het Wij en de Objecten’ (the We and the Objects). In this performance, human formations will be made in geometrical shapes. The performance will be done several time during the summer of 2018. The group that has the best performance every day, will be announced as our day winner and receive a prize. At the end of our season, the best group performers will be announced as the ultimate winner and win a dinner at Kunstpodium T with Cindy Moorman!