Exhibition ‘A Picnic Frenzy’ (AMP8) on show until 27 June at TAC Eindhoven – extended! 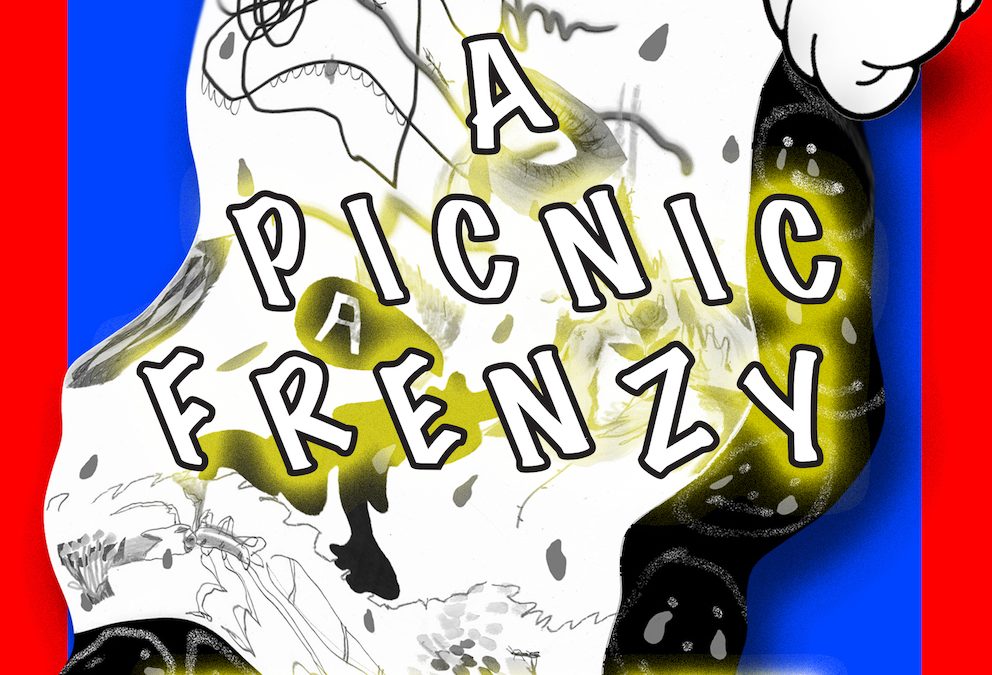 In the eighth exhibition of the Apprentice Master season 2020/2021 Apprentices Reinier van Duijn, Andrea Dautzenberg, Fee Veraghtert and Elias Vangenechten will be exhibiting with Master Arash Fakhim. The exhibition is on show from Thursday 27 May until Sunday 20 June at TAC in Eindhoven.
TAC is open for visits on Friday, Saturday and Sunday from 14.00 to 18.00 A reservation prior is not necessary.

A Picnic Frenzy was born out of the need to gather. Prior to the exhibition we started a collaboration in which we held a jpeg relay. Each artist randomly sent JPEGS to each other to which the next one responded and so on and so forth. The past year has shown us that there are no rules to the game and that every form of grip has been rigorously shattered. Therefore we didn’t apply any rules of our own. The shattering of the everyday didn’t prevent us or limit us from entering into a collaboration. On the contrary, it made us see the possibilities of working remotely. Once we met unsure, unsettled and unknown, through a screen on the internet, inside each of our own living rooms. We became rather acquainted through the handwriting, shared imagery and the visual language. Have you ever met someone in a few clicks…and it just clicked?

A picnic frenzy is the result of our collaboration set up as a solution without answers, in which the works are hung, bundled and perched on the floor presented without any compromise.

Andrea Dautzenberg (1995, The Netherlands) has always had a hard time parting with the inanimate objects in her life. That inability to throw things away forms the heart of her work.  We all surround ourselves with things, but what is it about these garden-variety treasures that makes them so valuable to us? Is it the material itself– and if so, what makes one material more precious than another? Or isn’t it about the thing at all, but more so about what the thing embodies? Although she’s interested in our motives, her work is not a quest for answers. Rather, it’s an expression of the connectedness she feels with the life of things.ELIAS VANGENECHTEN // Playing hide and seek in all sorts of greenery • ‘’Elias is eleven years old and claims that the sky has more than one sun.’’ • When I was little I never believed there was just one sun. I used to think trees grew endlessly taller than their shadows and thought birds spoke the same tongue as I do. • My father always made up stories about someone named Elias. Sharing the same name, I always felt connected to whatever he created, joining along his wonderful adventures before falling asleep. • One time, Elias was a pirate. He would sing along with the sirens till the moon sank down into the ocean. Another time, he was busy climbing trees, collecting insects. That’s when I realised I was just like him. • On an adventure, following the imaginary footsteps of a made-up jester. He had the same face as I did. Carrying my lost memories in his pockets. • My memories are like breadcrumbs showing the way to the hidden treasure, which is seemingly buried in Mum’s garden. These encounters, crumbs and gems, these memories. although not as clear as they once were, are now being rediscovered dipped in green paint. • What critters live down the burrow? What happens underneath the blanket of a shadow? Playing hide and seek between different realities. Has anyone seen the blue brittle birds? Those who are small are never heard. One time I was struck by green lightning and started seeing colours no one has ever seen before. Toxic green, a red so vibrant that you wouldn’t be able to describe it. • I wonder what the frogs were laughing about earlier. What would the Moon say to the Sun if they managed to cross along the skies? Would it be night or day? • In mossy green woods I recognise you. • Did you end up finding the one that stole your marbles?

Fee Veraghtert creates figures that stand on their own, stripped of figuration and narrative. Yet afterwards she often plays with the titles of her works, as if she wants to figurate the abstraction. With this she creates a certain tension, in order to make the audience look at her work longer. The interaction with the painted figures is important. As well as the relationship between the different paintings in the space. With her work Fee always tries to create a ping pong effect in which the paintings communicate with each other. The pure, formal qualities of painting form the basis of her work; color, shape, texture, composition, transparency, overlapping, coincidence and layering are some of the key concepts that encompass her oeuvre. Her work usually starts from the graphic monotype technique. She uses this technique to research color combinations and compositions. But she also tries to allow coincidences. Abstract shapes and bold colors have a greater impact when they fill your entire field of vision. There is no middle ground, she either makes very small or very big paintings.

For Reinier van Duijn the experiment itself is the most important part about his work. He uses a wide range of (unconventional) mediums, techniques and methods. The characteristics of the work of van Duijn are; sculptural, raw and full of energy. It often contains humour and absurd elements, but there is also a darker layer to discover. Personally and in his work, he is always on a quest for freedom and space in all facets. His source of inspiration is nature in its entirety; the plants, animals and human world of which we are all part, its diversity in shapes and variations in seasons and environments.

Arash Fakhim’s praxis is concerned with dialogues between the object, the subject and the shifting relations between them. In his studio, the often painterly works evolve around processes and actions in which objects are created or put into motion to produce images. These gestures, actions and their echoes leave traces that result in works.
Outside the studio, right underneath the sun, Fakhim experiments with a concept of objects in time through a technique called cyanotype. As a true sampler of things, the unstable tendencies of the materials that he uses seem to be at the heart of his assemblages.
Fakhim’s methods result in a choreography between objects, time and space, once set in motion, distilled and laid out as a forever echoing map. Often his painterly gestures are showcased as a sofreh- , curtain- or tapestry- alike installations.
|Within the frame of his own work Fakhim often plays with the morphable tendencies belonging to the paintings, as the components are spread out on the floor, creating a sofreh. A sofreh is a cultural utensil to accommodate gathering, usually in the form of a piece of fabric or textile on the floor— for people, family and friends to sit on and eat.